(Excerpt from Tales From Heritage Farm) 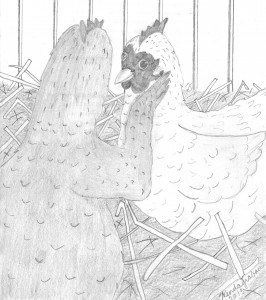 “You are wrong there, Hildy. Is that really what you think he is saying? You had better clean out your ears. He’s not saying that at all,” insisted Frieda.

“What’s that you say?” Hildy cocked her head to hear better what her neighbor had just said.

“Come on over here and let me check your ears,” urged Frieda. “You’re not going to peck at me, are you?” asked Hildy defensively.

“Of course not. Come on… ha! Just as I thought,” she commented diagnostically. “You’ve got feathers in your ears. Let me wipe them out for you.” Gently Frieda feather-dusted over each of Hildy’s little ears with her wing feathers. “There now, ” she asked, “do you hear better?”

“Oh-h-h, he’s louder than before. He really did say, ‘God is good to you.’ Has he been saying that all along?” she asked in astonishment.

“Well, I guess I stand corrected. Praise the Lord!! Maybe I should think more praising thoughts. It might help. A hen’s lot in life still isn’t easy though,” added Hildy.

“No, but a little praise to God goes a long way to lift anyone’s spirit. We can all face each new day with a better perspective and

“Oh, pardon me,” Frieda blushed, “I just laid an egg. Praise the Lord!”

You may have a list of hardships or misunderstandings to deal with like Hildy did. Talking it over with a friend and exercising praise to the Lord can turn the tide for you as it did for Hildy. And when you hear, “Cock-a-doodle-doo——————!” listen closely. In rooster vernacular, translated it means, “God is good to you.” Respond as Hildy did and “Praise the Lord!”