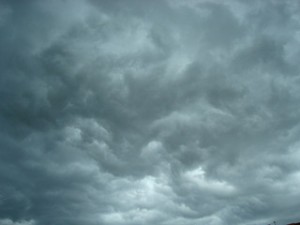 Today the temperature ranged in the 60s. Winds were brisk.  It had a definite affect on our workday.  So much depends on the weather.

Two days ago we eagerly baled hay.  The weather forecast, rain, made getting the job done an urgent matter.  The dry hay lying in the field was ready.  After baling the fifth load, the sprinkling began.  Heavy rain slammed into the landscape.  We had to leave the last two loads still lying in the field.  But we felt upbeat since the five loads we got were more loads than we expected to bale.

Today my  husband raked the rest of that field of hay.  Unfortunately the forecast predicted more rain.  But the hay had dried sufficiently that it was ready.  Right after lunch we headed out to the field.  The chilling winds forced me to wear a parka.  That was a first for me.

White fluffy clouds skimmed through the blue sky swiftly.  We got started and had trouble with the knotter on the baler.  The delay added to the tension of our job.  My husband got it fixed, but by this time, the blue sky was gone and the gray clouds overtook the sunshine.  Black clouds loomed in the west.

As we hurried to beat the coming storm, about a dozen birds swarmed around the tractor while we sped along to put up the hay.  The farm dog trotted along side, playing tag with the darting, swooping swallows.  They made a delightful spectacle.  They provided a pleasant diversion as we worked under the pressure of the coming storm. 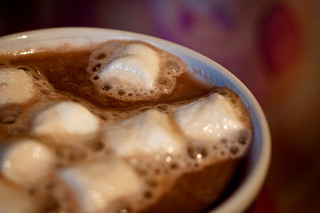 Finally, we finished the field.  We took all the short-cuts in baling that we could.  I drove in 4th gear rather than in 3rd to finish before the rainclouds drenched us.   We got less than 2 full loads and the field is clear.  Now the new hay can grow unhindered.

As I drove, the parka and gloves kept me cozy.  This is the first time that after baling, we eagerly came inside the house for a cup of hot chocolate.

Yes, farmers are storm racers.  We give thanks to the Lord that he enabled us to get this bunch of hay done.  This time, He let us beat the rain.