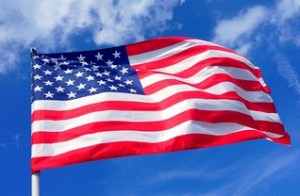 For us, Independence Day had to be a work day.  I am not complaining.  The Lord provided sunshine and conditions for baling hay.  The cut hay had been on the field for 7 days.  This is less than ideal.  Three or four days would have been much better.  In that seven days we did have some rain.  So the hay we made lacked desired quality. Yet to save the crop beneath it, we had to get it off of the field in order for the new crop to thrive.  Does this sound like the last batch of hay we made? It certainly does, yet the last time we baled, the hay had been on the field for ten days before we could bale.  To celebrate the day, we baled about 8 loads of hay.

On the 5th of July, the Lord gave us more sun, a steady wind, no dew on the ground and we were able to bale at least 16 loads of hay of excellent quality.  (We lost count since we were so busy.)  It had only been cut for a few days and had not been rained on.  This hay oozed with the quality the cattle need. What a day to praise the Lord!

Forecasts were grim, but He blessed us anyway.  Besides that, three of our four children, one son-in-law and his sister were on hand to help with this important task.  To top it all off we got to see five of our grandchildren at the farmhouse when the workday was over. We were all exhausted and  the day after our muscles ache, but we are praising the Lord anyway.

You will notice that of the 5th of July, we could bale, because the farmer had been faithful to do his part.  Amidst nasty predictions, he cut the hay and crimped it in faith that he could bale.  He did not know he could, forecasters were naysayers in this regard. Yet, in faith, he used his knowledge, experience, ability and tools to get the job done so that when God provided the weather, the hay would be ready.  The Lord gets credit even for that.  He gives the farmer the good judgement and He provides all that is necessary for the harvest.

It is fitting for us to say, “Praise the Lord” in every circumstance.  And when He moves His Mighty Hand to work on our behalf,  it is also fitting to say, “Thank You, Lord.”  And we do.

« What Do I Do?
Previews of Coming Attractions »