With harvest ended, winds press on my windows
Bearing many curious sounds.
This morning, I heard unexpected tones
Wafting up from the barnyard crowd.

The silage bag, down by the barn,
Holds bushels of fermenting corn
Meant for cattle during winter’s blast.
Today it drew three from a gaggle.

Hilarious cackles, unsteady waddles,
Hiccups, and delirious honks;
Apparently, they had quite a hoot.
The intoxicating brew took their senses away.

Migrating habits
Were sorely impaired.
The last I saw,
They took off flying North! 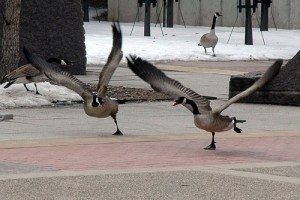