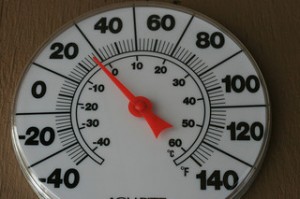 The lack of a blanket of snow on a field of alfalfa hay, can leave it defenseless when the hard-freezing temperatures come.  We have had such a winter.  The balmy winter has given way to the cold March which is going out “like a lion”.

Alfalfa can freeze when the thermometer dips down into the high 20°F range.  We have seen some wilting on our plants already.  We are hoping that only a few leaves froze and not entire plants.  If a hard freeze comes, it can winter-kill the crop.

The farmer plants a new field of alfalfa hay each year.  Last year’s alfalfa seed was planted and harvested once.  The second year after planting generally yields 2-3 cuttings.   As dairy farmers, the main crop is MILK.  The better fed the cattle are, the more able they are to produce it.  The dairy cattle need lots of hay to sustain them over the coming winter, so it is crucial to have abundant hay production.

So you might see how dependent farming is on the weather.  The weather is completely out of our control.   The crop of feed needs good weather;  the cattle need the feed for good health and milk production; and dairy farmers need the milk production to produce their annual income.  Although there are many things farmers try to manage, the details are still out of their control.

Pressing the point a little further, one can see that if the dairy industry has less milk to sell, the population will have a lack of beverages, ice cream, yogurt, butter and cheeses to consume.

So, in this sense, yes, life is not in our control.  We are all dependent.

Jesus said, “Look at the birds of the air; they do not sow or reap or store  away in barns, and yet your heavenly Father feeds them.  Are you not much more valuable than they?”Matt. 6:26(NIV)

He counts you as very valuable.  He will gladly listen to you.  Take Jesus’ advice, “But seek first His kingdom and His righteousness, and all these things will be given to you as well.” Matt. 6:33 (NIV)