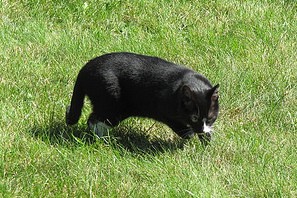 Velvet, the cat, was doing her own thing, trespassing on the farmer’s territory.  It was natural for her look after her needs, but she was not aware that doing it on the farmer’s field was placing herself in danger. It is true that man is like this cat.  He lives life on his own not aware of God’s authority and rule over his life or of His wishes for man’s welfare.  Man does not recognize that in taking charge of his own life, he is trespassing in God’s territory. Man may even be ignoring God.

The farmer’s wife cared about the cat, a fact of which the cat was unaware.  The wife expressed her concern for the cat’s welfare in words to her daughter. Similarly, when God sees that man is in danger of destruction, He says so.  He provided His Word to communicate that to us.  In John 1:1, it says, “In the beginning was the Word, and the Word was with God, and the Word was God.”

The gospel continues in John 1:14, “And the Word became flesh and dwelt among us, and we beheld His glory, the glory as of the only begotten of the Father, full of grace and truth.” Just like farmer’s daughter coming to the cat to rescue it from danger in the hay field, Jesus came from His home in heaven to rescue mankind from the danger that he was in.

Real life situations can illustrate things about God, like it did in Velvet’s case. Though these are imperfect reflections of God Himself and His deeds, there is a perfect place to learn about Him.  God’s Word, the Holy Bible, provides the information and the power to change our lives.  Hebrews 4:12 says, “The Word of God is living and powerful, and sharper that any two-edged sword, piercing even to the division of soul and spirit, and of joints and marrow, and is a discerner of the thoughts and intents of the heart.” (NKJV) I hope you were encouraged by Velvet’s story. Let God’s Word be your biggest encouragement.

We have a card that may bring you pleasure.  It is called “Family Bible”.  Find it in our store.