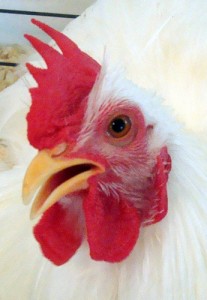 Many young children have roamed this farm yard over the generations.  In it, my girls have happened on aggressive animals now and again.

When my youngest daughter was fourteen years old she would walk to the calf shed and be accosted by Terror, the rooster.  He was protective of the hens to a fault.  He charged after her and her sister many times.  Our older daughter had the job of mowing grass back in rooster territory.  Terror took that as an insult and flew at the mower and its operator many times, spurs flying.  He had a very scary reputation.  The girls avoided him as often as possible.

One sunny day we will remember, Terror used his masculine ire effectively and appropriately.  My husband related this incident to us with a chuckle. Terror escorted the hens across the calf yard.  As they came to the center of the yard, 500-pound calves came running full tilt to the feeding troughs.  Terror and the hens were between the running cattle and their food.  To allow the hens to scatter to safety, Terror dug in.  He stood beak to nose in front of them and ruffed out his neck feathers ready for a fight.  This startled the cattle so that they stopped-on-a-dime.  The staring contest continued peacefully till Terror strutted off the calf yard and went on his way to the chicken yard.  Terror, the five-pound rooster, won the day over 5,000 pounds of beef!

There comes a time in a rooster’s life when life comes to an end.  And Terror was no exception.  He died and a new rooster was promoted to take care of the new flock of poulets.

The girls feared this rooster too, but to their amazement he had more docile personality.  This one we called a Good Old Rooster. But for good or ill, we will always remember Terror.

« An Afternoon with a Carrot
The Birth of a Card »