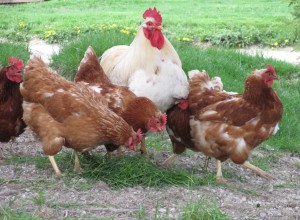 On our farm, we keep a flock of laying hens. Presiding over the hens is one rooster. After the hens lay eggs for us for about a year we move them out making room for the new and upcoming flock. Most often the rooster moves out with his hens.

Our last rooster, however, stuck around. He was a big rooster, very protective of his ladies, and knew his territory. Many other roosters in the past tended to be of the arrogant, possessive type. They attacked human beings simply because they walked in or around the chicken yard. Some charged when they were in the “human’s territory”.

Not so with this rooster. He protected the hens from coyotes, foxes, and raccoons, yet he knew that we provided food and shelter for the chickens, so he honored our authority. His attitude and demeanor were consistently trustworthy. For that reason he reigned in the chicken yard for about seven or eight years. Now that is a long time, if you recall they usually are gone in one year.

Last week, our good old rooster fought his last fight. He took on a fox to protect one of his ladies. His weapons in fight, spurs and beak, recently were reduced to single spur and beak. Yet he put up a good fight. But, sadly, he did not make it. We sure will miss that guy around here. It’s not often that we have found a rooster of his caliber.