Rome is working on a massive tax program.  Although in its infant stages, it is proving to be a major source of agitation to the people of Israel.  The entire Roman world is being summoned for enrollment in order that a more accurate taxation system may be put into effect.

Enrollment will be carried out in stages, the first of which is already in progress.  This mandatory enrollment lists men according to their birthplaces.  Even now people are making pilgrimages to their hometowns.

Our little town of Bethlehem is not exception.  Local inns have been touting their “No Vacancy” signs for several days.  At least for the time being, what’s good for the Caesar is good for business. 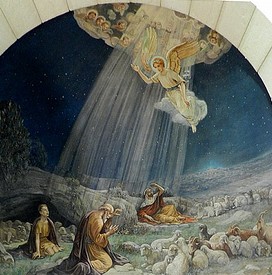 “Strange sights during the night in them thar hills outside of Bethelehem,” say local shepherds.    While keeping watch over their lambing flocks, the shepherds’ silent night was interrupted by messengers of heavenly magnitude.

All the shepherds agreed that the whole landscape was lit up with radiant beams as a multitude of angels sang, “Glory to God in the Highest and on earth peace among men with whom He is pleased.”  The Herald angel addressed the shepherds.  He named Bethlehem as the Savior’s birthplace.

Reported one witness,  ” I froze in my tracks at the sight.”

Several told The Bethlehem Star, “We were so scared that we tried to hide–but the light was overpowering.  There was no place to run.  The angel tried to calm us down and said he had good news for us.  It all happened so fast–and soon the blackness of night crowded in on us again.”

This could mean that there are good tidings in these strange heavenly sightings.   Perhaps Bethlehem has been the chosen site of revealing something special.