I have heard of the proverbial ” slippery slope” before.  Have you?

In my mind’s eye, I always pictured a person, on foot, slip-sliding his way down a steep incline.  It is not very dramatic, but it communicates an uncomfortable, possibly hazardous, encounter with gravity.

After the melting of snow this spring, I can testify to a real “slippery slope” experience I had.

I had the simple task of driving with my daughter to a friend’s house so that she could catch a ride back to college after spring break.  It was only a few miles away.  The roads had been cleared of snow and ice for several days, so I expected and uneventful drive.

Things went well for most of the trip while we drove paved roads.  However, when we got on the gravel roads, pot holes filled with melted snow jostled us as we drew closer to our destination.

Our friends live on a beautiful wooded bluff overlooking a river.  The road from the valley up the hill can be treacherous when the road is icy, but that was the last concern on my mind.  The weather had been so spring-like that I had no concerns about slipping as we drove up the hill or not making the 60° grade.  We had every expectation that the road up the hill would work just fine. 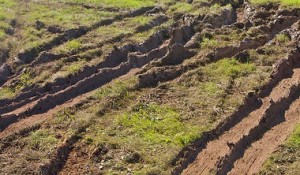 My daughter was driving and did a great job.  We started up the hill.  She tried to maintain the climb at 25 miles/hour, but the wheels started spinning.  She slowed down, yet there was still so much of the hill to go up.  We were in about the middle of the steep climb when to our unbelieving eyes, we saw mud ruts about 6 inches deep that we had to drive through.   By now our speed had decreased to a labored 10 miles/hour.  I questioned if we would really make it to the top of the hill.

With these muddy conditions, what a task it would be to get a tow truck to pull us out!  Other concerns included the possibility of oncoming traffic who could easily lose control while trying to pass by us.  Another scenario of concern was that some car could come up behind us going up the hill.   Without saying it, I thought that the road conditions had doomed us to getting stuck.

Traveling in a deep rut, my daughter could only hold the steering wheel and apply pressure to the accelerator.  We both prayed that the Lord would get us up the hill.  He did.  We got through the deep, muddy ruts, to a less steep part of the incline.  She kept the car moving forward and we breathed a sigh of relief.

The grade had reduced to a 30° slope.  Just then we came around a corner to see icy ribbons spreading across the road.  Our ascent continued to be threatening.  Navigating the ice with increasing speed could send us off the road.  We kept praying and the Lord guided us over that.

On the other side of the icy patch, we met our second set of muddy ruts.  At that point we were almost to the crest of the hill.  My counsel to the driver, “Gun it.”  And we made it through. 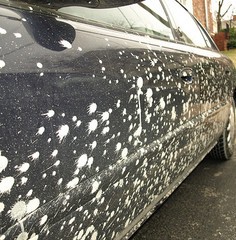 Needless to say relief flooded in.  We got to our destination, muddied, but unscathed.  My daughter met her ride.

However, I was shaken enough that I found it hard to visit.  I needed to get on home and descend that same hill.  The ruts were just as deep and threatening, but gravity was now with me.  This time I traveled on the downhill side of the road.  It looked treacherous, which again drove me to prayer.  The Lord guided our little car safely back down the hill.

Let me tell you, a slippery slope is not fun!  Avoid it.