Jerusalem in an Uproar

by I. Ben Visited

Last week, Jerusalem was the scene of some disturbances.  Astrologers, or Magi, from the East visited King Herod.  They reported that they had seen the star of the new King of the Jews.

When King Herod heard this, he consulted with the chief priests and teachers of the law.  These illustrious members of Jerusalem society informed him that according to the prophet, Micah, the Christ’s birthplace is Bethlehem in Judea.   This is our same Bethlehem that is approximately six miles south of Jerusalem.

Bethlehem is a small town.  Many of our inhabitants make their living as shepherds outside of the city.  It hardly seems the kind of town in which a king would be born even though our great King David came from here.

The night after the Magi met with King Herod, they left with his strict orders to find the Child.  King Herod expected them to report back to him with information of the Child’s precise whereabouts.  For two day the King has waited the Magi’s return.  However, there has been no trace of them.

Today, Herod clearly vented his great anger.  In the wake of the Magis’ presumed compliance, trickery is now suspected; disobedience to the kings orders and flight to their homes by another route.

For the past two days, Bethlehem has been overrun by shepherds.  All of them seem to be headed to the stable at Jethro’s Inn.  I caught up with one yesterday who said,  “I have never seen anyone like Him.  He seems to be able to look right into my soul.  His eyes look much older thah the few days old He really is.”  This man claimed that the Child of whom he spoke was the promised Messiah of Israel. 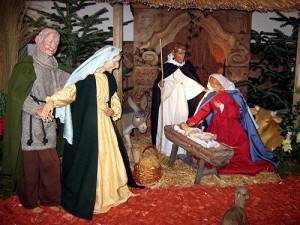 Since the beginning of this influx of shepherds, they have been going through the streets publishing the news,  “The Messiah has been born!  Praise be to the God of Abraham!”

Many of the townspeople, spurred on by these exclamations, have also visited the stable.  Almost every one of them has come out looking more peaceful and full of joy than when they went in.

Even if this Child is not the One who will free us from Roman dominion, He has affected the people of Bethlehem to the greater good of all.