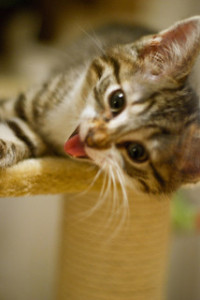 The 1-day old kitten drank from a plastic medicine dropper and took about 1.6 ml. per feeding. He ate often. Gradually his appetite grew as he did.  In a few days he could nap longer.

At 12 days old his eyes were opened.

By about 2 weeks old, we noticed him start to purr when content.

By the time he was 3 weeks old, he took as many as 8 droppers full (about 6.4 ml.) at a feeding. He did not take to the cottage cheese right away. He was dependent mostly on the formula for nourishment.

At 3½ weeks he was teething. Some discontent was noted. My daughter, his adoptive mother, let him suck on the tip of her little finger to pacify him. (Since his claws were getting much sharper, one had to be careful he did not claw and hurt one’s skin. A plastic bandage put on the distal end of the finger-not the fingertip-would protect the kitten’s caregiver.)

Cottage cheese was included in his diet at about 3 ½ weeks. He resisted the cottage cheese, but with the feeder’s persistence, he began to suck on cottage cheese curds that he was hand-fed. We also decreased by half the amount of honey in his formula. Initially he was not impressed, but that same day he was compliant and ate it.

By 4 ½ weeks, the kitten began showing strength enough to walk. Rather than creeping on the floor and dragging his belly on it as he moved, he was beginning to have strength in his legs to hold himself up off the floor. He was not able to run.  He was still too young. He did, however, begin to show signs of typical kitten playfulness. He did not notice a ball or string at this age, but he liked to be handled, scratched and petted.

The kitten learned to eat from a dish at about 4-5 weeks. The trick to teach him that it was as good as a dropper-feeding was to put a half teaspoon of raw hamburger in a dish. He did not have to be told anything. He wanted it and could eat right away. He just needed a strong motivation to do it. Thereafter, we poured formula over the beef to get him used to lapping up a liquid. He was dropper-fed less and less.

We began Kitten Chow and he was glad to eat it. He was fed by the dropper only at bedtime. By the age of 6 weeks he was noticing strings and wanting to be playful with them or someone.

At the age of 2 months he was no longer eating formula, but water and kitten chow. He showed signs of being very healthy and playful.

If you delight in farms, try this card, “Barn and Milk House.”