Our kids got chicken pox. It is hard and uncomfortable at times. In between applying calamine lotion to lesions and trying to cheer up the kids, I came upon the idea of making a party. It is hard to celebrate alone, but we made the effort to make their stay at home out of the ordinary and not so humdrum. Food is a necessity, so we used it to create the party.

I have a recipe for a yeast bread called “Fun Buns.” They are baked in a 9″ cake pan. When cooled, I slice the bun horizontally. That 9″ piece of bread was covered with a salad mixture such as  tuna or chicken. As you can see from the photo, boiled eggs made the eyes and nose. Pimento pieces made the red pox on the sandwich face.  A slice of dill pickle formed the smile. And curly pretzels gave a salty hairstyle to the sculpted sandwich. 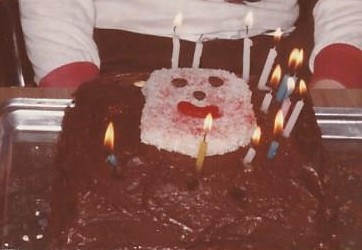 For dessert, we had cake with candles. I put a slice of crustless, white bread on the top of the cake. It, too, became a face. Red sugar sprinkled on the bread illustrated another chicken  pox face. Raisin eyes and nose along with a red frosting smile gave the face some personality. The candles just made things fun.

This party required that no guests be invited. Thankfully, it is a party that we did not have to have annually. Because it was an out-of-the-ordinary event, it did lighten up a hard circumstance. If  you get in a fix like this, try having a chicken pox party.