I got the idea for creating a home-made circus.  The acts came from the children and I helped them fulfill their dreams.  My son was the lion tamer and he also rode an elephant.  One of my daughters played a high wire artist. One did a dancing act and a trapeze act.  I played the part of the ring-master and a juggler. We planned and practiced.

Costuming was made simple by the girls wearing leotards and bathing suits for their performances.  A few embellishments, like caps and flowers, added to the festive experience of our little circus.

Wild animals had to be made.  For instance, my son rode an elephant.  We used a dust mop for the elephant’s body.  We covered the mop end, or the head of the animal, with a paper bag on which we had drawn the animal’s mouth and eyes.  We fixed floppy ears to the side of his head.  The elephant snout consisted of a long piece of brown paper. 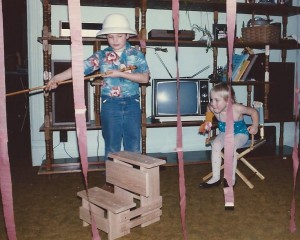 The lion required a cage, of course.  To make it we strung streamers from the ceiling.  A step stool served as the lion’s perch.  The tamer wore a safari hat and worked with a bamboo fishing pole for his whip. My daughter played the part of the lion.

The high wire consisted of a plank lying across 2 chairs.  My daughter navigated it well.  For the trapeze act, our littlest daughter had a baby swing that we had bought.  We wound up the spring and the swing moved her back and forth. She had a swinging performance.

Also, we played one of our littlest daughter’s favorite children’s song. We played it for her dance.  She held balloons and danced to her song.  It was such a hoot.  I laughed till tears came.  What fun we had!

With all of us in the program, the only one in the audience was the kids’ dad, my husband.  That would not do to have a sparse audience after all of our work and practice so we invited Grandma and Grandpa over for the show.  One time we invited another family with children to join us.  Their children brought acts along with them.  It was quite a show.  Popcorn fit in well with all the good the entertainment.

There you have a few of our ideas.  I hope that this gives you a little nudge in the same direction so that you can enjoy some creative pretending-times with your children. It will bring you some special memories.