While my husband dealt with his routine evening chores, my three daughters and I went walking in the farm yard as the sun lowered and the peaceful evening drew near. 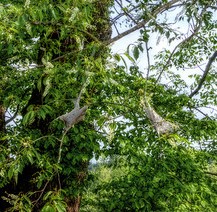 Shock grabbed out at us as one daughter spied a peculiarly fibrous pouch stretching from twig to branch in our front yard’s crab apple tree.   Clearly this evidence suggested that the farm had been invaded.  Tent worms had discovered our home.   A colony grew just a mere few feet from the farmhouse.  This was no laughing matter.  Tent worms can invade and kill the trees they nestle on.  They were unwelcome intruders and had to be eliminated as soon as possible.

We girls might rather have let the men handle it, but since other chores kept our farmer on duty, we put our heads together and formed “the Hit Squad”.  We girls would not put up with these encroaching pests.

We began gathering our equipment:

Our organization and determination saved the day and the tree.

The tent worms had found a high branch on which to make themselves comfortable.  Hence, the step ladder stood beneath their dwelling.  My son-in-law, not busy in the barn by this time, became available to use the chain saw on the branch that the worms called home.  We girls labored at reaching the branch and pulling it down low enough for our chain sawyer to do his part.  He climbed the ladder and handily cut down the offending branch.

Ah, what an asset he was for completing our mission!

We girls took the branch to the burner barrel, lit the matches, ignited the branch, the leaves and the tent worms went up in smoke.  The Hit Squad met the challenge with success.

« The Sandbox
Have You Had Your Oats Today? »