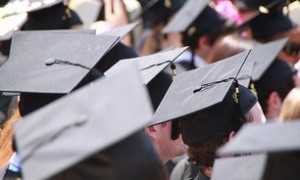 Some things in life changed for the little girl.  She became a young lady and she would soon graduate from high school.  She chose a college and made plans to study nursing.  This move she faced with excitement and a little fear.  Sadly, she left some friends at home and had to make new ones all over again at college.

While she went to the high school, a war had started to take young men to southeast Asia.  Her cousin was one of them.  He was just 18 years old.  He believed in Jesus.  He was a Christian.  Word came that her dear cousin died from the wounds he suffered in that war.  He was now in heaven.

She had to face the fact that even young people die.  “Everybody,” she thought, “should be ready when it is their time to die, even me.”  This sobering thought gave her the desire to read the Bible.  She wanted to “be ready.” She wanted to go to heaven some day.  The old question came back to haunt her,  “Am I really forgiven?”

As a college student she made a desperate attempt to find good people to befriend.  She looked for them at a church youth group.  She expected to find young people and adults at the church who would support the life-style that she had chosen.

She wanted to serve Christ.  She experienced joy with these new friends she had and with learning about Jesus. They encouraged her to follow the Lord.