As a part of my good-natured coping mechanism, I thought I would make my calf-time a bit more interesting.  I sought to converse with the calves.  Now, one cannot really talk with a calf, but one may talk to one.

Therefore, I decided that each one should have a nickname.   If one had a unique pattern on his/her face that might trigger a name like “Checker” or “Wolfy.”  Some calves got their names from their location in the shed, such as “Corny” who lived in the corner.  And then there are others who got named by some characteristic in their personalities. 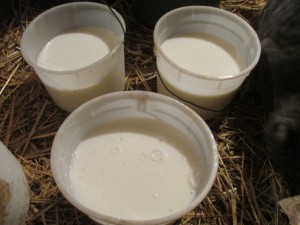 One such calf repeatedly jumped out of his stall in his eagerness to be fed.  A time or two I was successful at putting some calves back in. The calf had to be lifted or helped to jump back into his stall.  But this calf was different. He was not to be distracted from his goal, the milk.  I could not get him to jump back.  I could not serve milk to the other calves while he was hanging around the milk pail.  He would drink it all.

I needed help.  To save the milk from this calf’s advances, I put the milk pails outdoors while I found my husband and got his assistance.  He easily got the calf in the stall.  I fed him and that was that.

The next time I did the chores, I began the feeding process and out jumped that same calf.  I, again, summoned my husband for help.  This scenario could not go on.

The next time I went in for calf chores, I noticed a change in scenery.  My husband had placed a spare stall door over the top of the calf’s stall.  It was tied in place by baler twine.  Problem solved, we thought.

I turned to do the work and sure enough the calf popped out of his stall.  The lid turned out to be on top of the wrong calf! 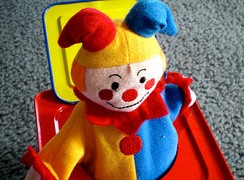 I decided then and there that the culprit needed a name.   That day, my husband built a ceiling over his stall.  It was high enough that it would not hurt his head and it gave him room to grow.  His name became Jack-in-the-Box.