Sometimes to cope with a chore one needs to watch for the unusual to diminish the mundanity and drudgery of a task. 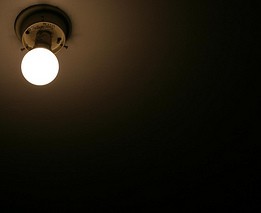 After getting the routine of my calf chores figured out, I set out on my early morning chores.  The cold night temperatures and the darkness of before dawn light gave proof that nothing out of the ordinary had taken place.  As I left the barn carrying my milk pails across the cement slab of the barnyard, I looked up at the calf shed.  The light was on.

“Hmph, that’s curious,” I thought.  “Maybe my husband was showing me a special courtesy.  Or, on the other hand, he could have gone into the calf shed and forgotten to turn the lights off.  All I know is that I did not leave the switch on.”

With that, I ascended the stairs, one snowy step  at a time, raising up the milk pails carefully to avoid spills.

The cats howled their hungry meows. 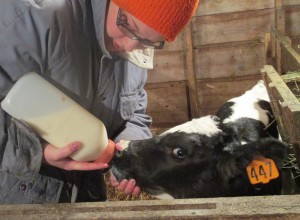 The calves voiced their approval that breakfast was on the way.  The cats were fed.  Some calves sucked their bottle of milk.  Others gulped from their calf pails.  Some of those being weaned slurped up their water.  I fed them all a slice of hay.

I carried out the emptied pails and shut off the lights.  I did, really.  I shut the door till the next time when I would feed them.

That evening, once again, as I left the barn, I could plainly see the lights shining in the night.  “Wow!” I thought.  “My husband must have decided to light my way.  What a sweetheart!”   I did my chores and shut off the light.

Next day, I commented at breakfast, ” How nice of you to leave the calf shed lights on for me during my chores.”

With incredulity hanging in my voice I replied, “Well, it has happened several times now.  What is happening?” 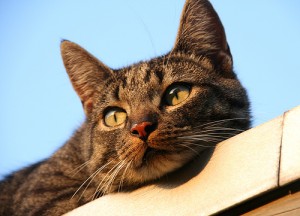 A smile stretched broadly across his face.  “It’s the cats.”

“Simple,” he went on. “They shimmy down from the loft along a stud.  As one passes the switch, he bumps it and turns on the lights.”