Not every housewife chooses to make desserts a priority.  But in our home it comes with the territory.  Farmers work very hard and need enough calories to equip them with enough energy to accomplish their heavy daily workload.

As the young wife of a school teacher, I went to cookbooks for fancy desserts for the first couple years of marriage.  However, when we moved to the family farm, fancy ceased to be the priority.  I worked with the foods on hand.  We had apples, raspberries, crabapples, elderberries, wild grapes, choke cherries, pears and rhubarb.  Many fruits made jam, jelly and sauce.  But pie became a favorite. 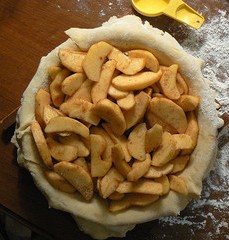 Pie
As a child, I recall watching my mom put a pie crust together and roll out the dough.  I especially enjoyed watching her peel and slice fresh apples for pie. What a delight it was to sample the apple slices after they were mixed up with sugar, cinnamon, nutmeg and a dab of flour.  I was always glad when there were enough slices left over for me to eat raw.  The leftover scraps of dough, Mom rolled into a thin pastry and sprinkled it with sugar and cinnamon.  Then she baked it in the oven.  That was as good as a cookie!

With the abundance of fruits, I worked at learning to make a good crust.  The secret to an excellent pie crust is good old-fashioned lard.  I like the pure stuff rendered from hog fat.  It is so rich that it requires one-fourth less of it than shortening in many of today’s recipes.  We often top off our pie slices with fresh cream or a scoop of ice cream.  It is yummy!

For my fillings, some I make fresh.  Others, I mass-produce.  I make 4 fruit pie fillings at a time and freeze them in a freezer container or bag.  Then in the winter when I need a pie, it is already mixed and ready for pop into a pie crust.
photo credit: Benimoto via photopin cc