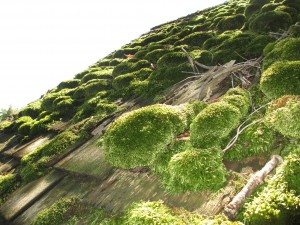 As you may already know, heritage is important to us on Heritage Farm.  One example of this comes wrapped up in a little log cabin built on the crest of a hill on the farm.

The cabin marked the bicentennial of the founding of our country.  Built in 1976, it has been a visual center of the farm.  It is easily seen by those who drive by.  Hence, maintaining it became a priority. 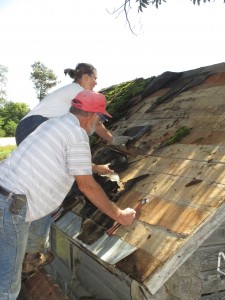 The cabin was originally built by my father-in-law and my husband. My husband’s grandpa helped put on the shingles.  The gathering of the men to complete this project became a special memory for us.

When the cedar shakes began to fail, re-shingling became a necessity if the cabin was to be preserved.  Moss covered the roof.  Plans began to take shape to replace the shingles.

Recently, the time came for my husband and our daughter to fix the cabin roof in order to preserve it.  Because our daughter enjoys shingling, this became a great chance for the fourth generation to get involved in working on the cabin. 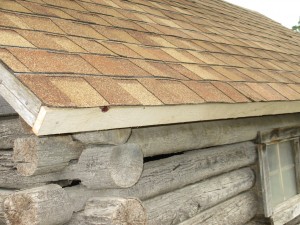 Old shingles were removed, new tar paper put in place and the new shingles nailed on the renewed roof.  The job took two afternoons to complete.

The “farmscape” is looking much better with the new life added to this old cabin we enjoy.

You can see our “cabin” cards at our store.