The day began for me at 5:30 AM.  The sun had risen and came up behind the grove and the old red-brick school house just east of the farm.  My husband hitched the conditioner to the tractor.  I hopped into the John Deere 2520 tractor seat, revved up the motor and was off to start my work as my husband finished his chores before he began milking the cows.

I pulled out of the driveway onto the paved road that led to the hayfield.  As I accelerated the cool air pressed against my face.  I drove to the field to crimp the hay that had been cut a day earlier.

As the hay is fed through the conditioner it is crimped.  The crimping breaks the hay stems in several places.  The extra breakage provides for the hay to dry more quickly.  In view of the rainy trend we had been having, we needed to speed up the drying.  We wanted this hay to be ready for baling tomorrow.  That job took 2 hours to get done. 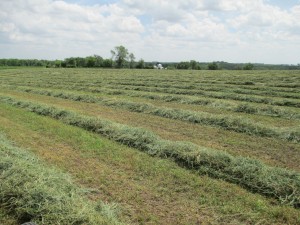 At 8 AM, I returned to the farm and had a quick breakfast.  When the milking was finished, my husband and I were off to the next field.  He drove the John Deere B pulling the hay rake to the field of dried hay.  I followed in the farm pickup.  My husband started raking, left me with final instructions and took off in the pickup for the farm.  He took the tractor and the haybine out to cut a fresh crop of hay.  I finished the raking.

We finished by 12:30, just in time for lunch.  We ate heartily.  He greased the baler and hitched it up to the tractor.  To the B, he hitched up two hay wagons.  I washed dishes.  Upon finishing, I donned my straw hat and headed out the door to start the baling.  I put gas in the 2520, hitched it and the baler up to another wagon.  We were ready! 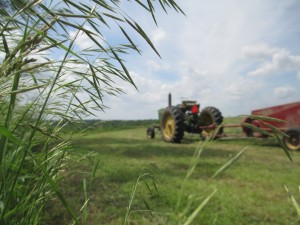 I drove.  My husband rode the wagon and stacked the bales.  After we baled the first load, my daughter came to relieve her dad.  He took the loaded wagon to the farm to unload it, while our daughter and I filled the next loads.  Our son was on hand to help unload bales at the farm.  We made about 14 loads that day.

My daughter and I finished baling and bringing the loads home by 8:40 PM.   Fortunately the sun was still up so that we could safely take the machinery back to the farm.  My husband had to milk cows in the evening so we left 4 loads of hay that did not get unloaded.

The long day was tiring, but very rewarding.

« Who is in Charge of the Weather?
Raspberry-Time Again »