We gave a lease on life to Ivy on her first day of life.  We warmed and nourished her.  We invited Baby, our mother cat, to come visit her.  Baby showed every tendency of accepting the kitten, even though she was not her own.

As she grew into a social kitty-being, we held and petted her.  She began to get playful and we encouraged her light-hearted antics with yarn and balls.  We began to introduce her to solid foods.  She went outdoors with us a time or two.  She caught the scent of the fresh earth as I weeded my flower garden. 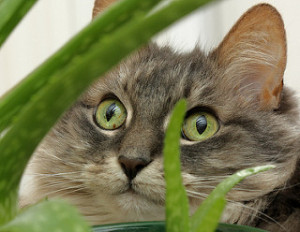 Although Baby regularly came in to visit Ivy,   three days ago, I went outdoors to weed my flowerbed.  As I worked Baby, our 3-footed mother cat, joined me and little Ivy.  I noticed Baby grabbing Ivy’s neck fur and she seemed to be tugging.  At last she got a good grip and Ivy and Baby moved across the grass together.  I thought this was a bit odd, but I thought I would keep an eye on the two of them.  Soon Baby had gotten the kitten under the garden fence and began taking her across the farm road to a shed.  I continued to watch.  Baby paused for a rest on the road.  Soon she moved the kitten past and heavy door and into a nearby shed.  I felt more confident that Baby was trying to add Ivy to her nest of kittens.  So I slowly moved into the shed to see where the nest was. 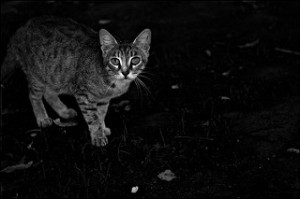 As soon as Baby sensed my presence she dropped Ivy from the perch where she had lifted her.  Her big round eyes almost pleaded for assistance.  I saw that Baby was heading up with the kitten, so I lifted Ivy to a small platform 4-feet up from the shed floor.  Baby appeared to want me and Ivy to follow her.  Ivy in hand, I did just that.  Baby then descended between the shed wall and the shed siding.  There was no light.  I did not want to drop little Ivy into a black hole.  I waited and listened.  I heard kittens mewing below.  “Aha!  This is the kittens nest,” I thought.  So carefully I lowered Ivy into Baby’s nest of 2 black tabby kittens.

Baby worked so hard to adopt little Ivy.  But she saw me as an asset and led me so that I could make her job easier.  Little Ivy became comfortable with her new siblings and Baby.  Although she still likes to visit us in the house she is adjusting very well to the outdoors.

« Kitten Growing Up
Inspirations from Ivy »